How to Forgive Yourself When You Hurt Someone

Recently my husband and I walked through a season of forgiveness in our marriage and with others, and what we felt, experienced and learned through the process made me wish that I had known more about the power of forgiveness when I was younger. Let’s talk about how to forgive yourself when you hurt someone.

Forgiveness can be a difficult journey, even though it offers liberation and peace at the end. When we hurt people, we feel the weight of carrying around the heavy burdens of shame, regret, and broken relationships. We’re hurting. We’ve hurt other people. We walk around day-by-day with these burdens on our back. We crave relief, both for ourselves and others, but how do we obtain it?

How to Forgive Yourself When You Hurt Someone

One of the primary ways people seek to restore relationships and unburden themselves from the heaviness of hurting others is by asking for forgiveness. In fact, you may be so burdened right now that you want to be able to forgive yourself, but you don’t know how or if it’s even possible.

First, know that your burden is seen and heard. You’re not the only person who has ever brought damage to another person. Every single human who has ever walked this earth has hurt someone else at one time or another. Even David, one of the most famous kings of the Israelites who was known for his love of God, wrote in Psalm 38:4 and 17-18:

“My iniquities have flooded over my head; they are a burden too heavy for me to bear…For I am about to fall, and my pain is constantly with me. So I confess my iniquity; I am anxious because of my sin.”

And as David asks God for relief to bear his burdens, we know from reading Scripture that God hears and responds. Psalm 68:19 tells us that “Day after day he bears our burdens.” Whew! If there’s anyone we can be completely honest with and know that we’ll still be loved and rescued, it’s God!

What is Forgiveness in the Bible?

Now that you recognize that you need forgiveness, the next step is to understand what forgiveness truly is. There are plenty of opinions circulating about forgiveness, only one option has the power to change how you live both now and in eternity.

In Matthew 18:21-35, we see how Jesus describes forgiveness: canceling a debt and setting someone free from having to pay back everything they owe you. It’s not a feeling, where we decide to forgive based on if we’re happy or in the mood to forgive. It’s not forgetting, either. In fact, forgiveness requires that you remember what was done (at least for some time) in order to appropriately know what “debt” to cancel. This process can take time to work through as people uncover all the wounds they’ve experienced.

And because of this process, forgiveness doesn’t automatically make everything okay. As people work through their hurt, it will take time for relationships to heal. Depending on the situation, some relationships may never heal on this side of eternity. But you can still learn how to forgive yourself when you hurt someone.

Forgiveness, then, is an action based on compassion. One person chooses to set another free from their debt of betrayal, harm, neglect or any other damage. Instead of constantly holding the offender in contempt for their hurtful actions or building up a malicious view of the offender in public, people who forgive know that life is much more peaceful when they stop chasing down the debts they’re owed and use that time to cultivate love.

Who Can Offer Forgiveness?

Now that you understand what forgiveness is, you’ll be able to determine who can offer forgiveness. Is forgiveness a gift you can give yourself? It’s important to learn how to forgive yourself when you hurt someone.

As we just read, forgiveness is setting a person free from their debt of a hurtful action. As much as we may want to forgive ourselves and release the burden of hurting others, we aren’t afforded that option. We’re in debt to another person for our actions, so we can’t make the call on how to repay them. Forgiveness can only be extended by the one we’re indebted to. While we ultimately want to release ourselves from the chains of shame and guilt, there’s only one person who can truly do that – Jesus.

As Jesus walked this earth, he showed us what it looked like to live a life in relationship with God the Father, and he watched all around him as people chose not to know God. Even today, he knows all the ways we’ve turned away from God and broken our relationship with Him; He’s seen us at our worst. And yet, as Romans 5:8 tells us, He proved His love for us “in that while we were still sinners, Christ died for us.” He knew the absolute worst about humanity, and instead of holding all of our debts and sins against us, He decided to forgive us while feeling the hurt we caused him. While Jesus was hanging on a cross to be crucified, He spoke to God the Father and said “Father, forgive them, because they do not know what they are doing.” (Luke 23:34)

If you want to know more about the forgiveness God offers you today, please watch this short video by clicking here.

Desperate to Forgive Myself

Are you desperate to forgive yourself because you’re carrying around a heavy burden of guilt and shame? The most life-giving thing you need to know is that Jesus’ pain on the cross removes that burden. He felt the entire weight of pain and betrayal from all of humanity. He took it upon himself to demonstrate that God wants a loving relationship with us more than He wants us to pay Him back for all the wrong we’ve done.

Listen Max Lucado as he talks about how God can remove our guilt. Jesus will take it away and we can walk in freedom.

Instead of grudgingly reminding us of all the ways we’ve hurt God, He decided to set us free from that sin. He wants us to live in relationship with Him again. Your first step is to let the burden of shame and guilt go by handing it over to God and trusting that He will not use it to harm you. You’re tired and weary from doing the heavy work of demolishing your sin on your own. Now’s the time to put the sledgehammer down and realize that the work’s already been done.

Jesus already felt the destruction of your sin for you. As He was buried, he buried your sin with Him. And most excitingly, He rose to life three days after being crucified. He showed us that all the sin in the world is no match for the love of God.

Live a Life of Forgiveness

As you continue to go about daily life, take time to reflect on the forgiveness God has offered you so that you can be in a life-giving relationship with Him. You can then begin practicing the habit of forgiving others in your own life. As we see in Matthew 18:33, Jesus asks us “Shouldn’t you also have mercy on your fellow servant as I have had mercy on you?”

As we come to understand how much God loves us and forgives us when we’re at our absolute worst, we then become people who want to also forgive and love others at their worst. When we forgive out of an overflow of our love for God, we are able to continuously let go of the burdens that we have against other people. We can then help others unload their burdens as well. We can understand how to forgive yourself when you hurt someone. When we’re liberated of these burdens, we can begin to live our lives as joyful, purposeful people – unhindered by weight of guilt and shame, and instead walking freely in love.

We invite you to watch the GREAT NEWS FOR YOU VIDEO on this page to help you understand and receive God’s free gift of forgiveness and salvation. 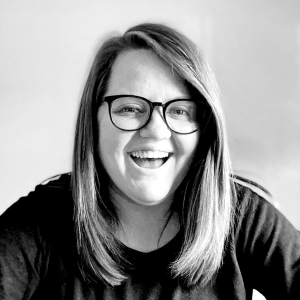 Alli is a learner, teacher and curiosity-follower. She's been serving in public education for over a decade, and she enjoys geeking out on her new blog about how faith and brain-science work together. In her free time, she hangs out with her husband and their beagle in Dallas, Texas.
Cuurio is a non-profit organization, registered in the U.S.A. • EIN #82-2055487
Cuurio operates with complete financial transparency. For financial information, please contact us at hello@cuurio.com.